Our DIY Pallet-Wood Floor Cost Only $100 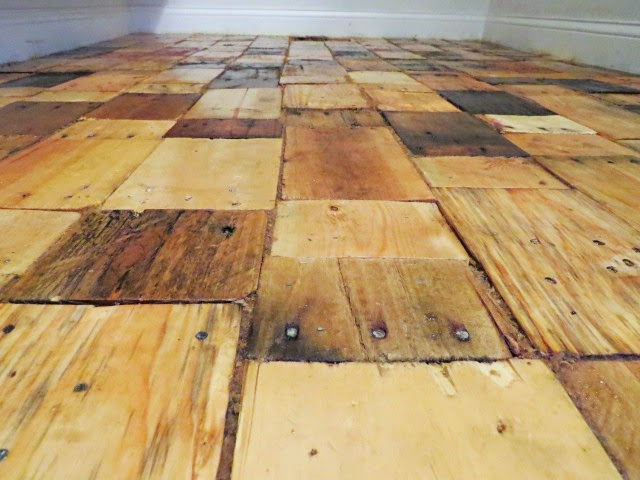 I’m excited to have completed that floor at last, and I must say, I am proud of it.  And myself.  It was quite an undertaking indeed but I think all the hard work and effort paid off.  I have yet to check it off my list but I’m looking forward to putting that pen to paper!  Mike loves the floor, whew; he said, “it’s your greatest triumph in the house to date.”  Nice compliment, huh?  He’s the coolest.

It’s one of a kind, it’s unique, and it came out better than I envisioned.  I’ll pepper in links to previous posts about the whole big long process which in some cases elaborates further on the steps.  In searching for older pantry floor posts, the list is lengthy and I see my first inklings began in early April.  I will admit, it’s very painful rereading some of those older posts.
Back in May, I ripped out the cheapy crappy terrible carpet.  So then here’s what I used for the new floor:
It’s kind of funny to type the materials list — it’s way shorter than it feels like, heh.  Probably because it took what feels like forever to collect the wood.
Total cost:  approximately $90.00
I began by collecting the individual cut pieces from Twitchy.  Each time I collected a batch, I would arrange them on the floor which also allowed me to track my progress on how many more pieces I needed.  Shortly after the wood collection began, I painted one of the walls in that happy happy Lemon Curd color, my now favorite yellow.
More info: humboldtartdept.blogspot.com 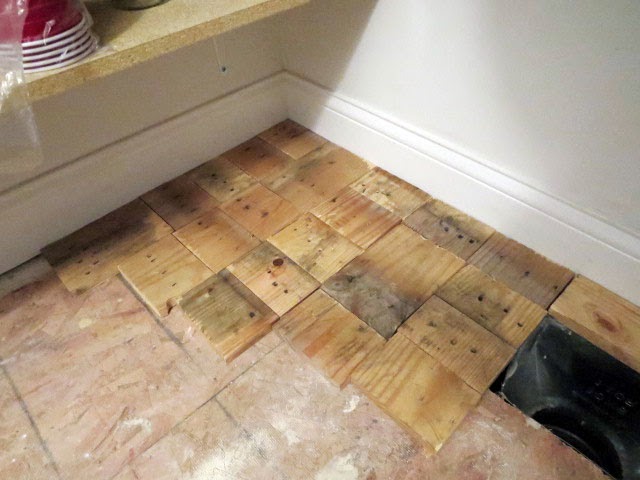 Once the wood pieces were all completely laid out, the opposite end required some trimmed pieces as well as along the wall opposite the main shelves. 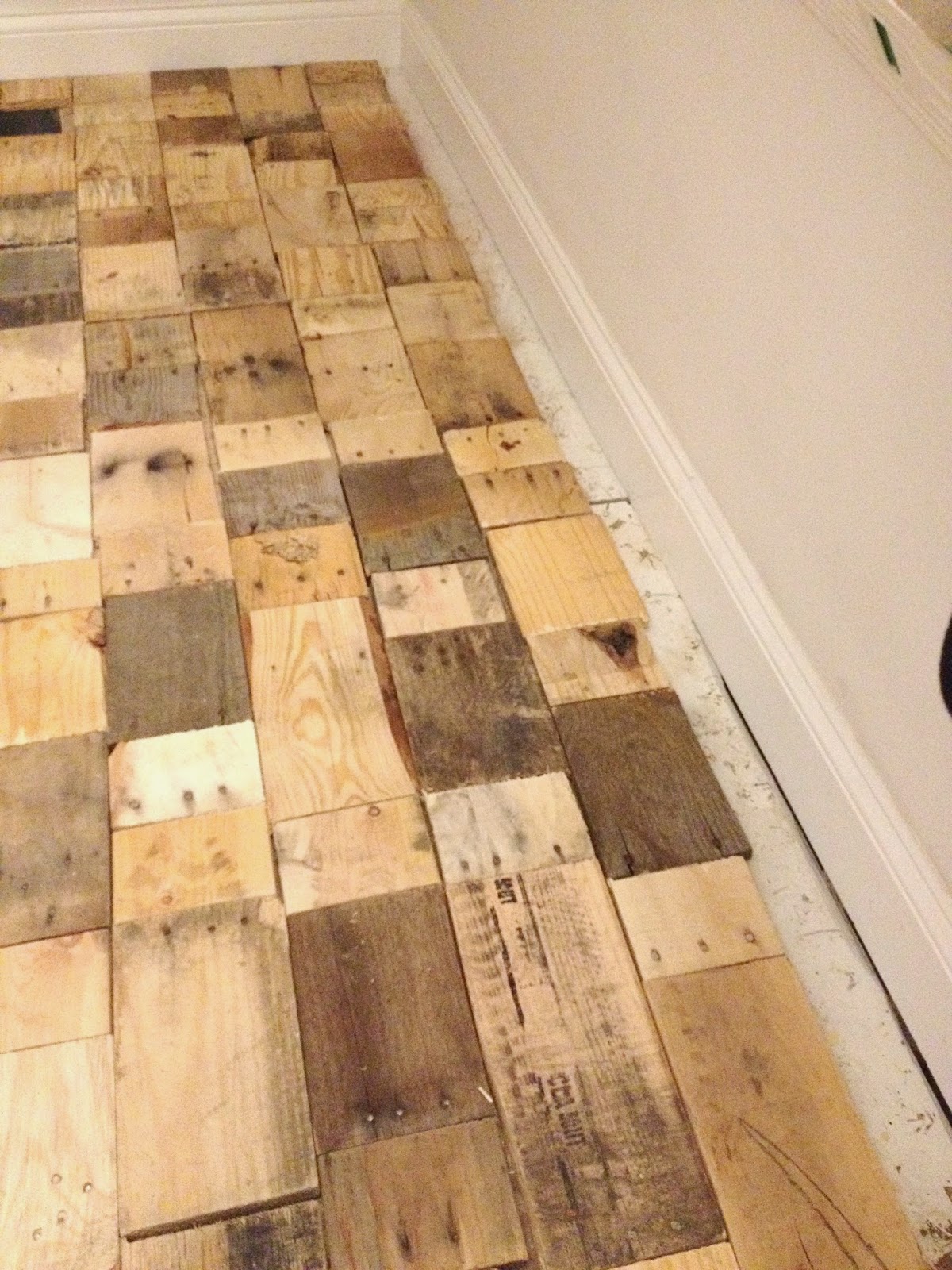 After getting all the bitty bits and pieces in, I turned to the small step. 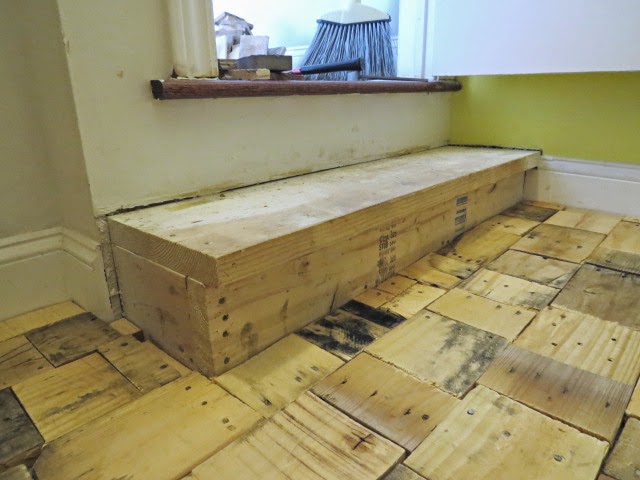 I had also been collecting thinner more slat-like pieces of wood and arranged them on the face and step. 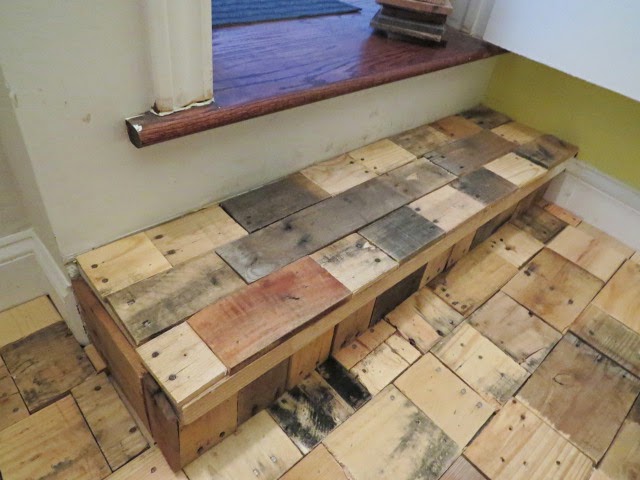 Next up, time for floor underlayment.  The original floor under the cheap ratty un-vacuum-able carpet was a mix of OSB and old old floor boards that appeared as though they were part of a porch of some sort. 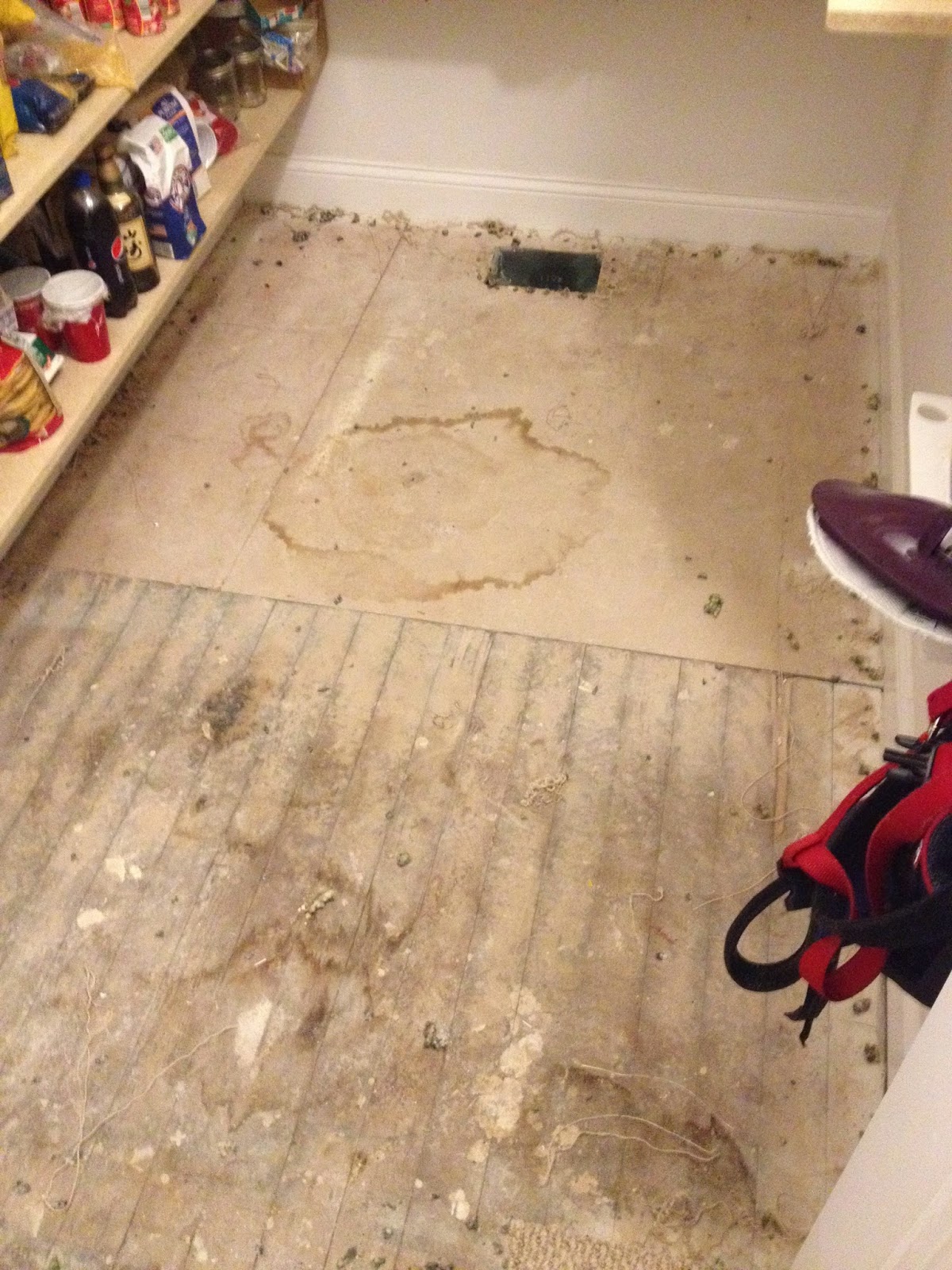 And with this flipper, who knows what the deal was.  But because the floor would vary in temperature more than one would anticipate throughout the seasons, mainly because there’s a ginormous gaping vacuous area open below the floor, a layer of insulation was the right thing to do. 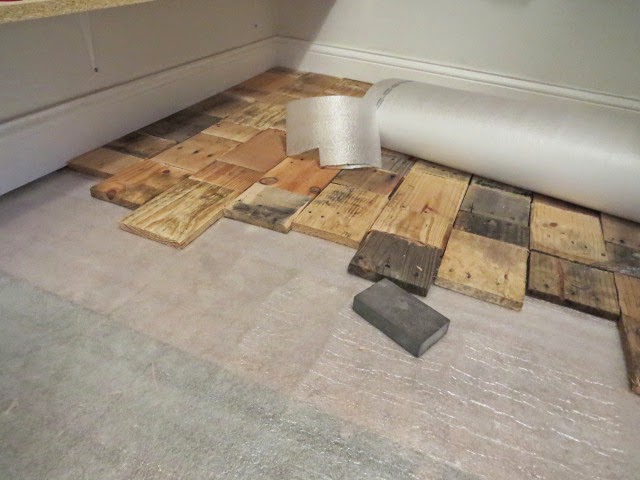 I measured out a piece, trimmed it easily with scissors, then stacked a portion of the wood pieces in reverse order in small piles. Stuck that underlayment down, re-lay out the wood and it was onto the next section.  Once everything was good to go, it was nail time!  I tacked it all down with a nail gun, courtesy of my excellent woodworking friend Scott. 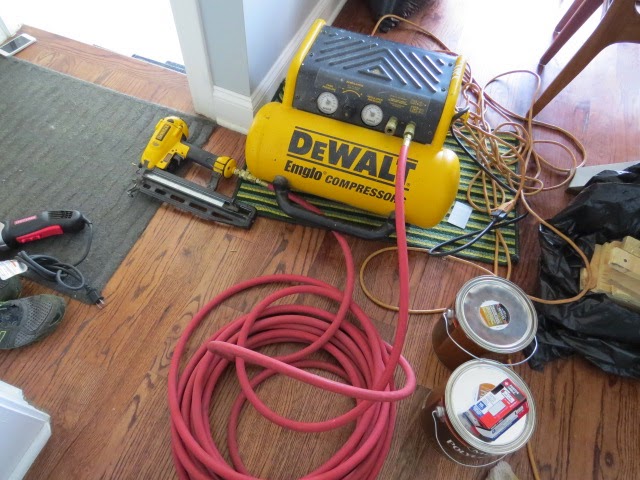 Thanks to my fine woodworking friend Scott too, I had a nice pile of very fine sawdust.  I had also gotten some planer “dust” but it really was a bad bad choice, so avoid chunkier shavings-like stuff. 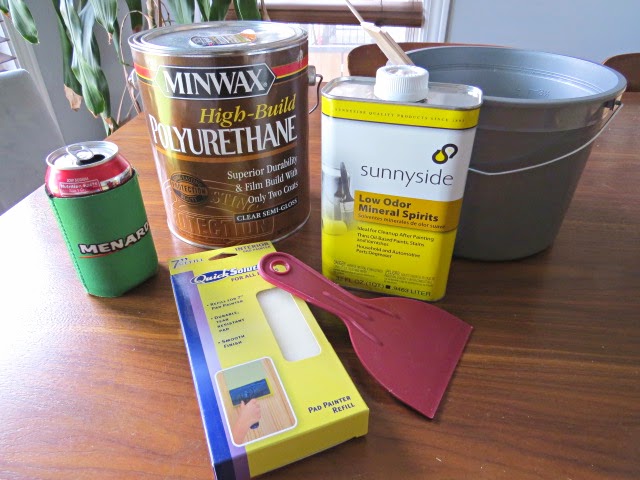 Mixed with mineral spirits as a thinner and the polyurethane, I had my “grout.”  It was a complicated and messy venture, certainly slow going. 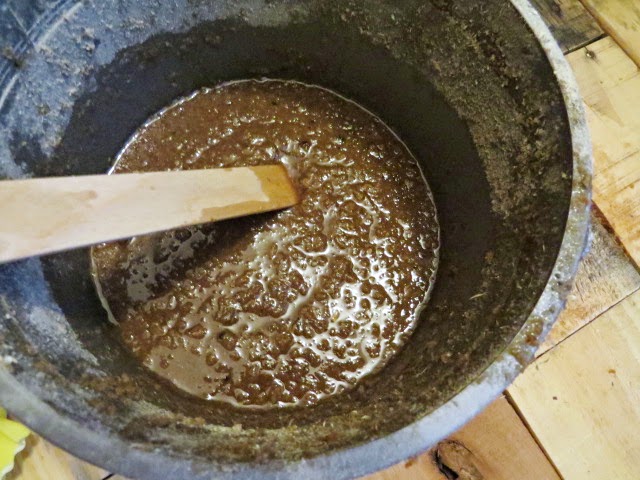 Not hard to do, mind you, just interminable if you’re a perfectionist like me.  It required patience and perseverance, mainly I think because the spacings varied wildly and the wood pieces are not of equal thickness.  Eventually (5+ hours later eventually), it was filled in and dried overnight. 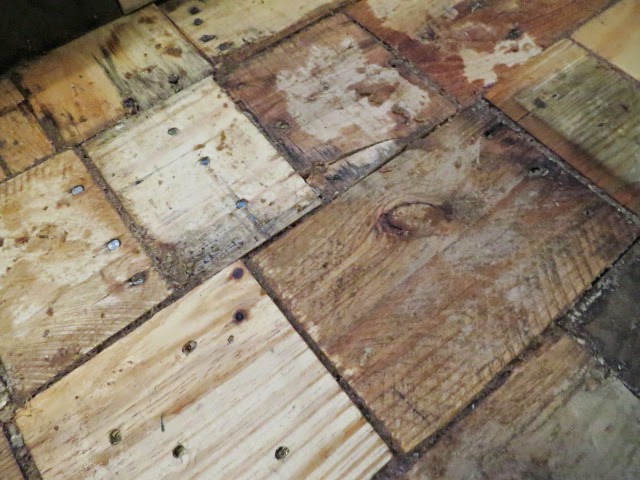 The next day was ugly.  I thought I had been tidy but clearly, ugh, I had not been.  Sigh. 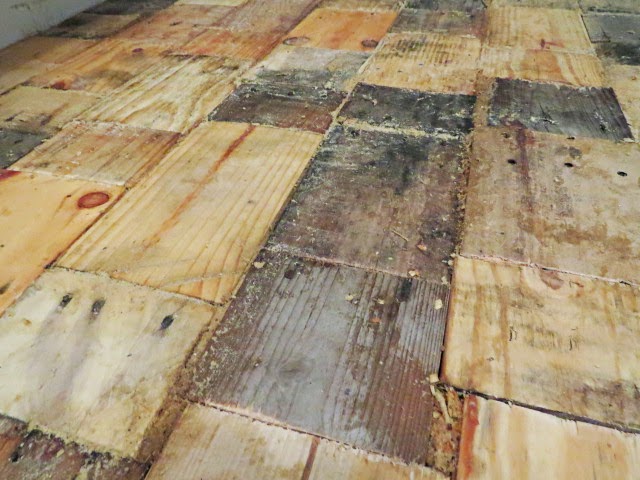 There were dried crunchy chunky messy bunches stuck all over the wood.  Aw man, I was disappointed.  And panicked. 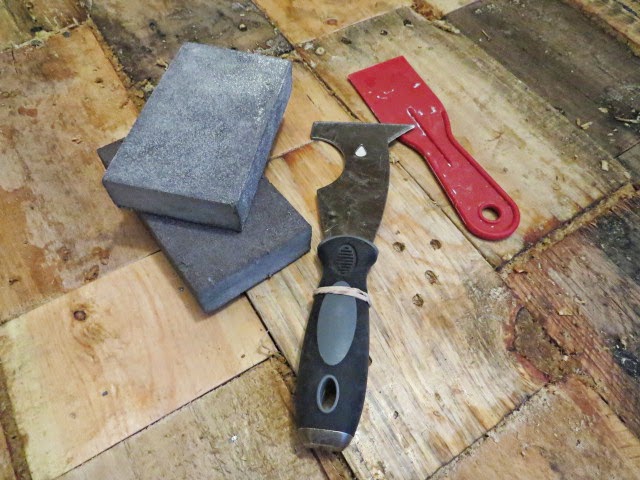 Using a paint pad, I applied the poly by hand so I could flood smaller gaps, minimize bubbles, and closely control the poly.  I closed my eyes, ran the first swipe and whewwwwww, the mess was erased.  Yesss.  What a relief!!
Two coats was all I had time for before my Sirens back to work deadline.  Hopefully two coats will tide us for a bit until I can get another coat or two on there after this season’s work has wrapped. 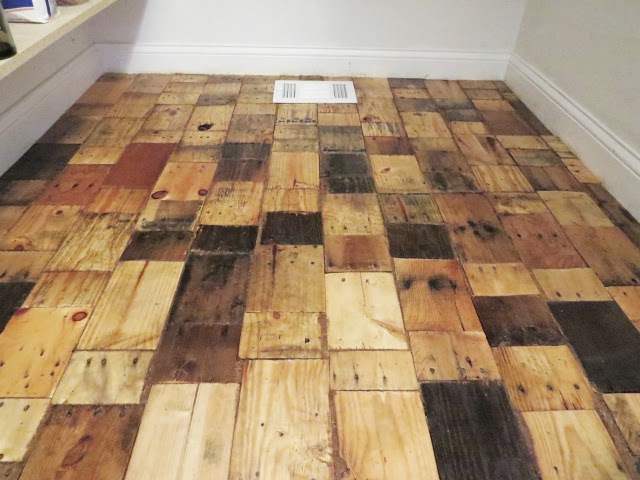 Pretty pleased with the way it came out, I must say.  A little pat on the back for myself.  Yay, right? 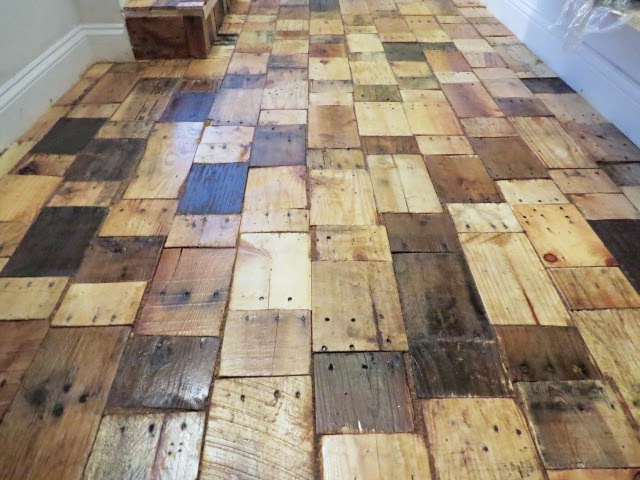 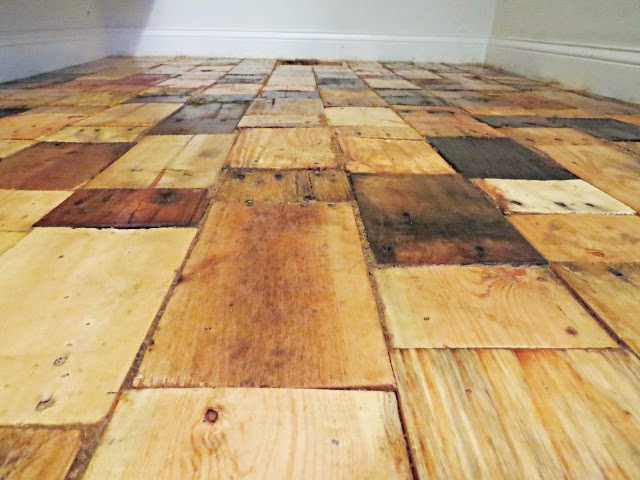 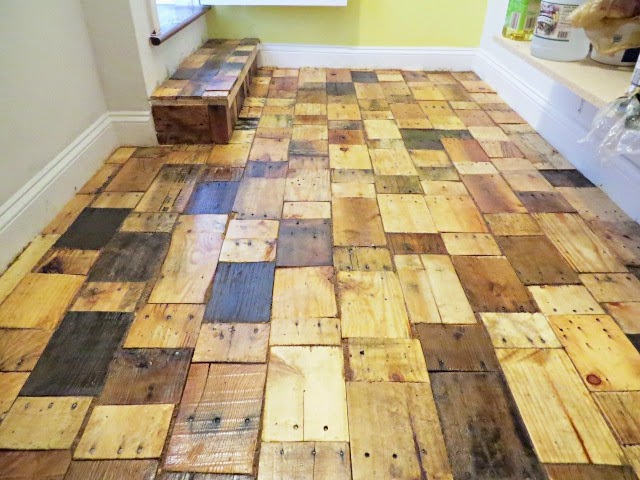 But yeah, it’s back at work time for me which means I won’t be able to work on the house much, if at all.  Sad face!  We are having blow-in cellulose insulation done this week in our second floor ceiling (!!) and I’ve asked Mike to be my eyes and documentarian so I can share with you.

So what does this mean for my blog?  I’m not sure yet what direction this will go for the next four-ish months, so I hope you’ll continue to hang with me until December here and there until I’m fully back at my list, refreshed bank account and raring to go.  Thanks very much for everything, everybody and hopefully I’ll be seeing you back here right soon!

Happy birthday to my dad today.  And today would also have been Hailey’s 12th birthday.  She is so missed.